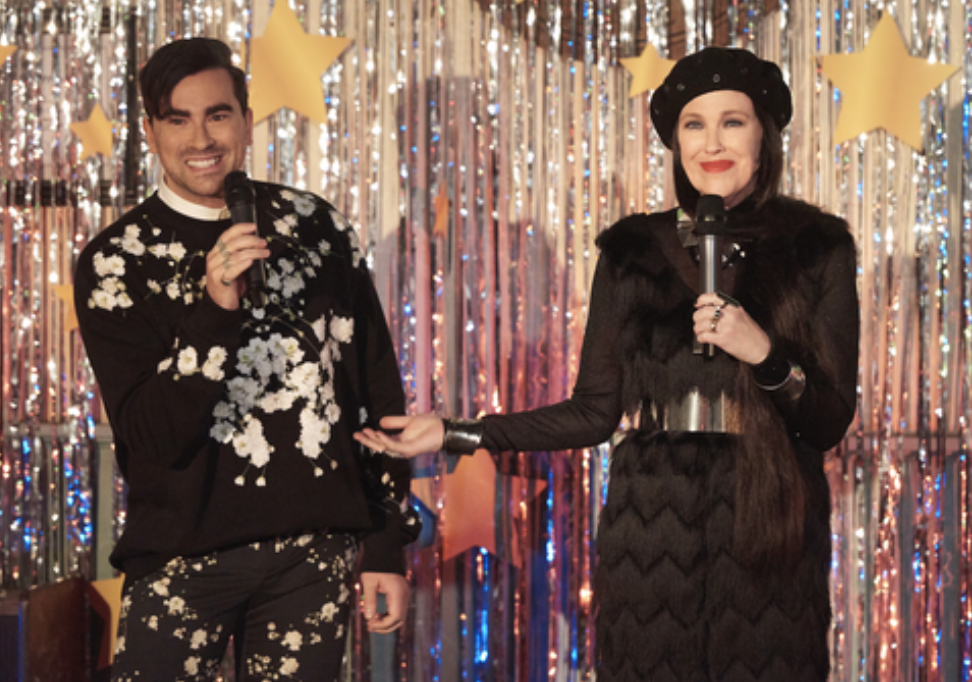 While the fashion fraternity stays divided on Emily in Paris’s eccentric wardrobe choices, netizens have picked a rather unlikely champion of everyday couture-

The black and white #OOTDs of Emily Rose and David Rose from Schitt’s Creek.

The proud winner of Emmy’s Outstanding Contemporary Costumer category, ‘Schitt’s Creek’ is a humorous take on the lives of a bougie billionaire family that has fallen from grace overnight. With no choice but to live out of an average motel in a town that literally lives up to it’s name- Schitt’s Creek.

The show’s director Daniel Levy , who also plays the role of David Rose shares the struggles of picking his outfit and that of Moira Rose, played by veteran actress Catherine O’Hara on ‘Best wishes, warmest regards’ that documents the show’s journey.

We can spot definitely spot Zara in quite a few places while Catherine tries out a selection of outfits on the set.

The actress took a cue from Daphne Guinness, an English Socialite and Fashion designer to breathe life into the quintessential diva with the most peculiar accent.

Her monochrome wardrobe boasts of a coutures by Alexander McQueen, Balenciaga and Givenchy. Be it the effortlessly gorgeous knit dress with a pearl studded collar accessory that Moira Wore for the Jazza Gals, audition or the bold and black leather midi-dress with fin-like shoulder details from the promotional Video for Schitt’s Creek.

A Midi-Dress topped off with a grand bejewelled hat donned by Moira is probably the last thing you will chance upon on a Amish farm.

But it will make an unforgettable sight indeed.

But what took the trophy home, is definitely David’s all-black ensemble. This hoodie with a furry mohawk has got fans and fashionistas throwing their money on knock-offs right away.

FYI, while you are reading this, Etsy/Ebay sellers across various fan groups are minting money selling close approximates of David and Moira’s wardrobe.

Though the character’s penchant for monochrome remains throughout six seasons, Moira Rose also effortlessly graces many audacious metallic outfits. Few of the notable ones include dull gold co-ords with dramatic bow detail on the neckline worn while campaigning for a place in the town council.

Queen Antoinette? Is that you?

Daniel Levy’s character David Rose who is a former New York city gallerist, mirrors Moira’s choice of clothing and wouldn’t be caught dead wearing brighter colours. While he maintains a healthy mix of punk and panache, both of their wardrobe choices is a commentary on the insecurities of the high society have-alls who prefer not to venture beyond their gold-plated boundaries. Evident from the bold stripes, symmetrical patterns and defined edges.

The flamboyant sister Alexis Rose, played by Annie Murphy, has lived a more “colourful” life dodging warlords and shady celebrities all her life, is quite the opposite and goes with the flow with flowy ensembles. Literally.

Schitt’s Creek makes a strong case for writers and stylists to make thoughtful choices when it comes to fashion. A compelling narrative works better when paired with a wardrobe selection that holds symbolic significance.

Needless to say, the team has paid utmost attention to the tiniest details while weaving together television’s most loved characters.